In Die Casting, hot oil units can be used to both heat the mold and also keep the metal a uniform temperature as it enters the die. This ensures that there are no cavities or porous areas within the casting.

The basic die casting process consists of injecting molten metal under high pressure into a steel mold called a die. Die casting machines are typically rated in clamping tons equal to the amount of pressure they can exert on the die. Machine sizes range from 400 tons to 4000 tons. Regardless of their size, the only fundamental difference in die casting machines is the method used to inject molten metal into a die. A complete die casting cycle can vary from less than one second for small components weighing less than an ounce, to two-to-three minutes for a casting of several pounds, making die casting the fastest technique available for producing precise non-ferrous metal parts. 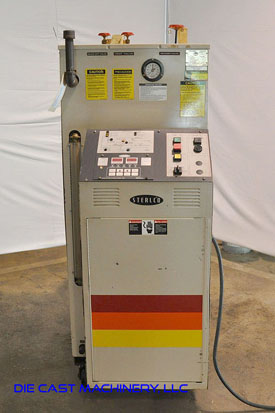 Of the many channels in any die, one type of channel that does not fill with material is a cooling channel. These channels allow water or oil to flow through the die, adjacent to the cavity, and remove heat from the die.

Semi-solid metal casting (SSM) is a near net shape variant of die casting. The process is used with non-ferrous metals, such as aluminum, copper, and magnesium. The process combines the advantages of casting and forging. The process is named after the fluid property thixotropy, which is the phenomenon that allows this process to work. Simply, thixotropic fluids shear when the material flows, but thicken when standing. The potential for this type of process was first recognized in the early 1970s. There are four different processes: thixocasting, rheocasting, thixomolding, and SIMA.

The principle application for used hot oil and temperature control units is to lower capital costs by expanding or extending the life of existing production line units.